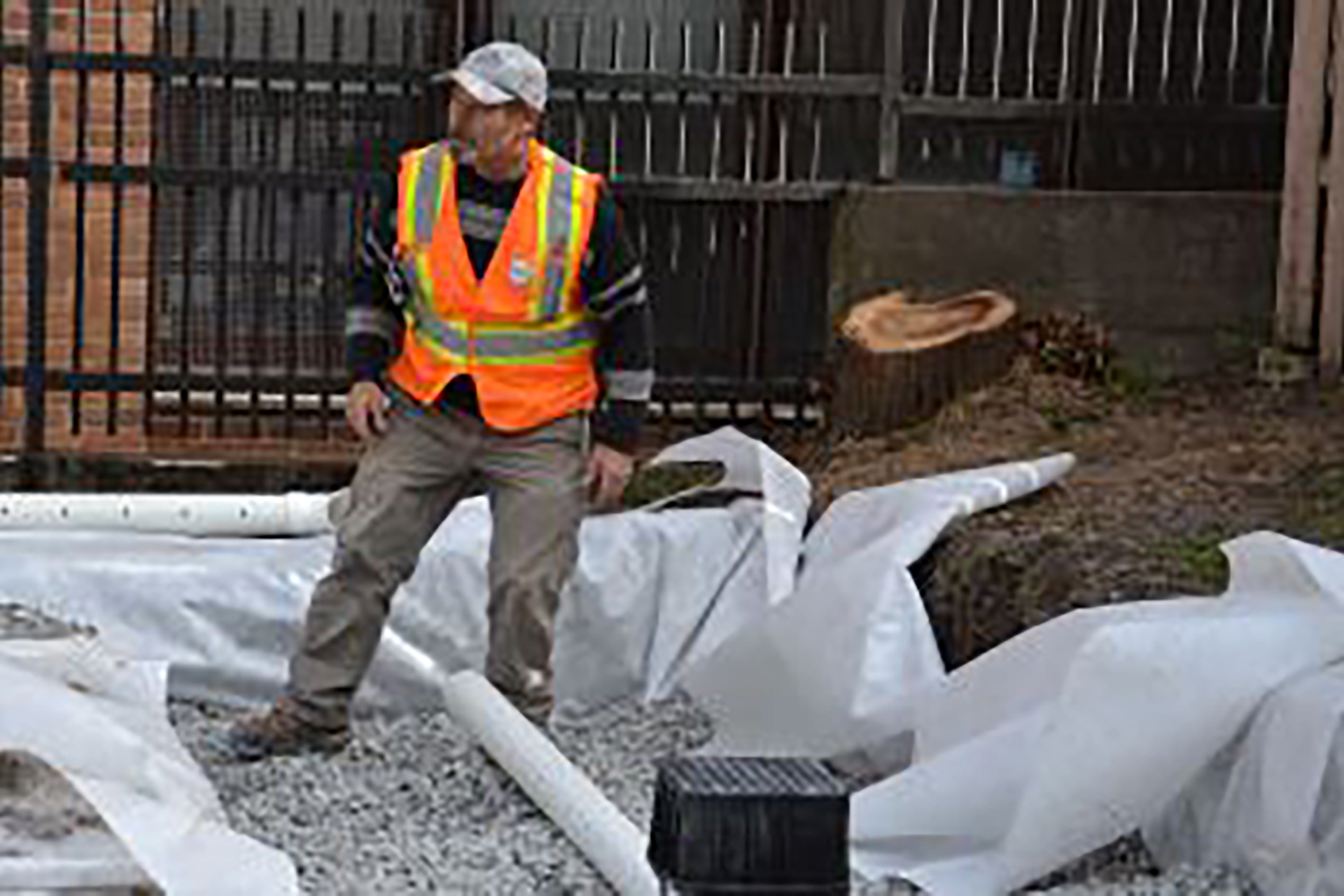 It’s been in the works for months, but a low-impact development system for stormwater being installed this week outside the New Dawn Centre for Social Innovation in Sydney is certainly part of a timely issue.

Jamie McCamon, Clean Foundation project co-ordinator, worked to install a low-impact development system to deal with stormwater outside the New Dawn Centre for Social Innnovation Centre in Sydney, Tuesday. The installation is expected to be completed this week.

The Clean Foundation is in the process of installing the system as one of three demonstration sites in the Maritimes — just a week after Sydney and other areas of the Cape Breton Regional Municipality sustained serious flooding during a rainstorm.

The demonstration sites in Sydney, Moncton, and Charlottetown are designed to showcase effective stormwater management options for hard surfaces that can be utilized by homeowners, business owners, cities, and towns.

McCamon said the technology they’re installing is used across Canada and around the world, but is relatively new to Atlantic Canada.

“We’re trying to promote the use of low-impact development methods,” he said. “We want people to see what is available for options. If you’re going to put in a new driveway, rather than putting down a traditional asphalt driveway, you can use porous asphalt so you’re no longer creating runoff. The whole idea behind this is to filter contaminants that run off regular parking lots and go into your catch basins and out into your streams and the ocean as pollution. This way we’re going to catch (the contaminants), trap them and filter them out into the soil.”

The New Dawn Centre for Social Innovation building has historically had stormwater issues on its Charlotte Street side and the new system, built on a metre of crushed stone, should help them manage it better.

“We’re putting in a bioswale at the end of the parking lot that’s going to run into a pad full of permeable pavers. We’re going to have permeable asphalt and four different types of permeable pavers, grass pavers and gravel pavers. From there all that water is going to run down another pipe into an existing catch basin so that anything that we can’t trap and filter here will have a place to go as well,” explained McCamon. “This should be able to handle a good-sized storm. When you get a torrential rain, something really out of this world, then probably nothing is going to handle that, but this will handle your average storm and we should be able to help with their flooding issues.”

Douglas MacLennan, manager of the New Dawn Centre for Social Innovation, said they’re excited by the opportunity to be a demonstration site for leading-edge technology.

“We like that they’re trying to use new, innovative ideas to solve old problems, so it was an opportunity for us and them to lead by example and hopefully showcase what the opportunities are,” he said.

“At the same time, we’ve had water and stormwater issues in the past, so we see this as an opportunity to alleviate those issues.”

The demonstration site is a joint venture between the Clean Foundation and New Dawn, with in-kind donations of time and supplies from a couple of local businesses, including McMullen Landscaping and Municipal Ready-Mix. Cape Breton University has agreed to oversee sampling and monitoring of the system.